When I began focusing more on the poultry I kept, one of the first breeds I fell in love with was the Orpington. Gorgeous, big, fluffy chickens who were described to me as excellent layers of large eggs, great mother hens and they come in tons of fun colors! I’ve owned buff Orpingtons, partridge, silver-laced and gold-laced Orpingtons. I have decided not to continue investing money and effort to this breed, though. Lots of strange things kept going wrong with them and I’ve had to decide they weren’t suitable for a setup like mine. I like to have my hens source their own food from whatever grows in the chickencoop. I also need them to be resistant to various weather conditions. Although Belgium has a very temperate climate, it’s also very changeable.
I think it might be valuable to emphasize how much the reality of (un)suitability can differ from what you read online or in books. I also believe that humans are to blame for the degeneration of traditional breeds, by focusing on aesthetics and neglecting other characteristics. In this post I want to focus on this problem, and hopefully inspire people to turn traditional breeds around.

My start with the Orpington breed

Although the Orpington is known for appearing in lots of different colors, there weren’t that many colors available in my area. Most Orpingtons only came in the ‘buff’ color, black was also common. I later managed to gather a group of unrelated birds in a partridge, a silver-laced, or a gold-laced color. Within two months, all partridge colored birds had died or gotten sick. None of the hens produced any eggs. Within the group I had left, several birds wouldn’t grow to a normal size. They didn’t show signs of sickness, they had the same food as the bigger birds, but still they wouldn’t grow.

I continued breeding the silver and gold laced birds that were left, I decided these must have the better genetics of the bunch. I bumped into a second problem with these birds; their eggs were all totally different! Some hens would loyally lay a small, speckled egg each day. Other hens produced fewer eggs, but theirs were always large or extra-large, even brown colored ones. When I realized how different the hens were, I realized that they were a long way away from the practical dual-purpose bird that was described to me in books.
As the hens got older, many other birds gradually became sick. Having this many animals die or get sick gets very discouraging, very quickly. I lost my hope of getting a good, strong group of breeding stock together and went looking for other breeds.

During my attempts at breeding Orpingtons and keeping them in good health, I also kept some other breeds. None of these performed as badly as the Orpingtons did. I did notice problems with some other breeds that seemed specific to their breed, or at least to the group of birds I had. I believe the problem with a lot of breeds today is the fact that most of the people who keep them and breed them, do so with the purpose of showing them at competitions. Today, there are many breeds that are being shown and judged based on their looks.
One of my strongest, most practical breeds are my Bresse chickens. There are breeders who just focus on the aesthetics of the breed, and there are lots of others who focus on their hardiness and productivity. The problem with some breeds like the Orpington is that there aren’t many who focus on the hardiness-productivity aspect. This isn’t just the case with the fun colors, the original colors such as buff and black also suffer the same issues. Reflecting on my thought process, I realize I’m part of the problem. I didn’t settle for the ‘ordinary’ colors, I wanted special ones. This attitude is of course one of the drivers of aesthetic breeding.

The sisterhood of the broody hens, orpington and australorp 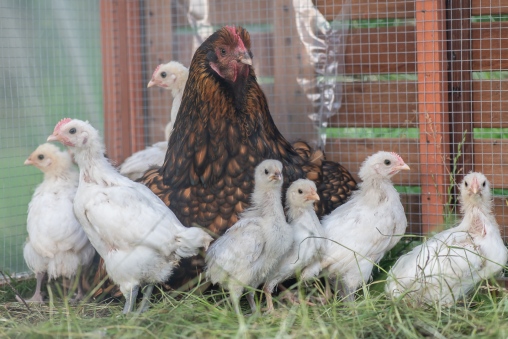 Culprit: selecting based on looks

When I say aesthetic breeding I mean a mindset that neglects issues such as health and wellbeing in favor of ‘beauty’ or ‘cuteness’. Think of small dogs and how people have been breeding them to be less healthy, but more cute or fashionable. Many breeds have very little resemblance to what they were last century. In some cases this has gotten so bad that the breed can’t have pups naturally. Some dogs have trouble breathing every single day of their lives, just because humans think it’s cuter to breed them with faces that are flatter and flatter. I’m of course not saying that this is the case for all of these kinds of dogs in every breed. I know people with some very happy little pug dogs. But the reality of where the breed is going is generally known, and we can all see that it isn’t good.

So, what am I suggesting we do? People with a heart for heritage breeds might be rattled by someone pointing all of this out. I’ll stand on my higher soapbox for a moment and explain what I think needs to be done.
I don’t believe heritage breeds are lost. I don’t even believe the Orpington, as a productive and hardy bird, is lost. When I look at the results some North American chicken owners have with their Orpingtons I can obviously see they have different, better breeding stock than what I had. But I really want you all to keep it that way! Please do not fall into the trap of breeding just for aesthetic reasons. If we want to save heritage breeds, we must make sure they are productive. Ask yourself whether the Australorp, New Hampsire, or Sussex will ever go extinct. No! They won’t! Because they are incredibly productive! I think we can get to that stage with many other breeds. Think of breeds that are more obscure than the Orpington, something specific to your country perhaps? The best way to ensure its survival is to breed productive birds that people will want to have in their backyards. Preserve colors and don’t tolerate big faults of course, but please focus on productivity and resilience to disease and weather. This way the vet wont need to be called as often, people will have more fun with their animals, we can make the cruel-egg factories close down and save a bunch of heritage breeds from disappearing.