It’s almost January, but I still have lots of typical fall vegetables to cook into something edible. Pumpkins and red beets can easily be preserved well into winter, all the way on to spring if you’re careful. I have a problem though; red beets aren’t liked here in my family. This soup is great for getting nice, healthy red beets shoveled into your red beet-hating family members. It tastes more like tomato soup and not like anything containing red beets. The pumpkin I used was a muscat de Provence variety pumpkin, use what you have. Muscat de Provence is a beautiful, tasty variety, but it isn’t the most practical if you want to peel it before using it. 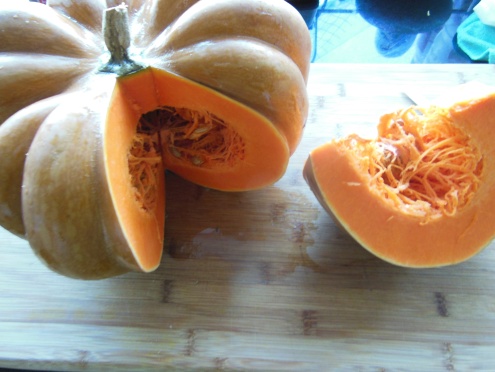 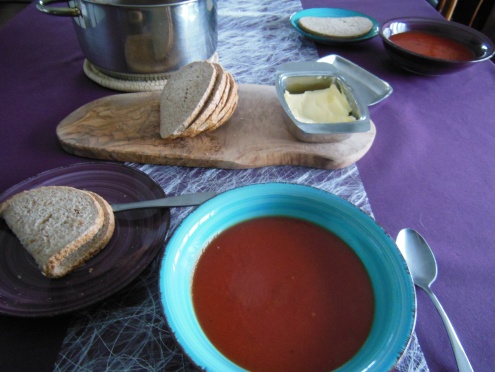 Start by peeling the red beets. Leave the tops on, this will make it easier to cut them up later. Put them in a pot, cover them with water and boil them on medium heat for 20 minutes. Whilst the beets are boiling, caramelize your onions and garlic in olive oil and begin peeling and cubing the pumpkin. When the beets are cooked, strain the water out, this process has already taken some of that ‘ground-taste’ out which red beet-haters don’t like. Cube the beets and throw away the tough tops. Add these to the onions and pumpkin cubes, cover with water, add a cube of vegetable stock, and cook until the pumpkin pieces are soft. Use a blender, or another appliance you prefer, to puree the vegetables.

Add tomato flakes, black pepper, cayenne pepper, smoked paprika and turmeric. If you want the soup to be very red and not orange, don’t use too much turmeric. I cut up parsley leaves to add after cooking because I like the look of the occasional green leaves in the red soup.