Ducks are an important part of the Lowland Homestead. Where chickens prefer their living space to be dry, ducks thrive on the humid, cooler weather conditions that are so common in the Netherlands.

The breed we know as the runner duck, is originally an Indonesian breed and is well adapted to life around rice paddies. These ducks are appreciated for their unrelenting hunger for everything that would also threaten the rice crop. Luckily for us, these ducks were brought to Europe and America in the 19th century, where their use and reputation remains the same.

Runner ducks are usually kept for pest-control and egg production. Personally, I haven’t found a productive layer among them yet, but it is true that they are exeptional at pest control. Their slender bodies allow them to move about between the plants in the vegetable garden without destroying anything. I own two duck breeds, runner ducks and muscovies. My muscovy ducks are excellent layers, great mothers and produce great meat, but they do destroy the garden when they get out! They will eat your lettuce, pull the ears off the cornstalks and eat ALL the leaves off your pea- or beanplants! Runner ducks however, will not leave a trace, except the absence of bugs and slugs, to attest to them ever having been there. 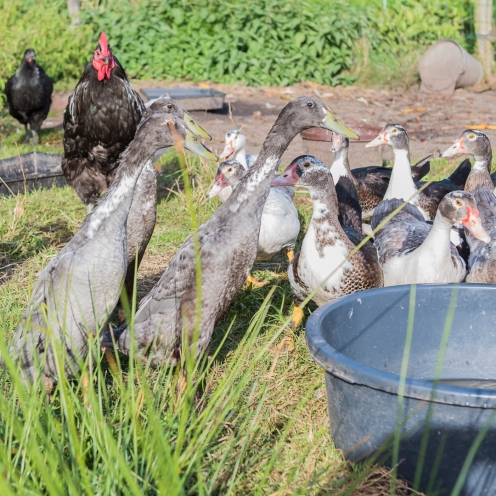 Some of the disadvantages I discovered with runner ducks;

The advantages (so far, I am still trying to find some runner ducks with good egg qualities);